Skip to Content
This post may contain affiliate links. You can find the full disclosure here.
304 shares

Have you thought about how to teach delayed gratification to your kiddo? 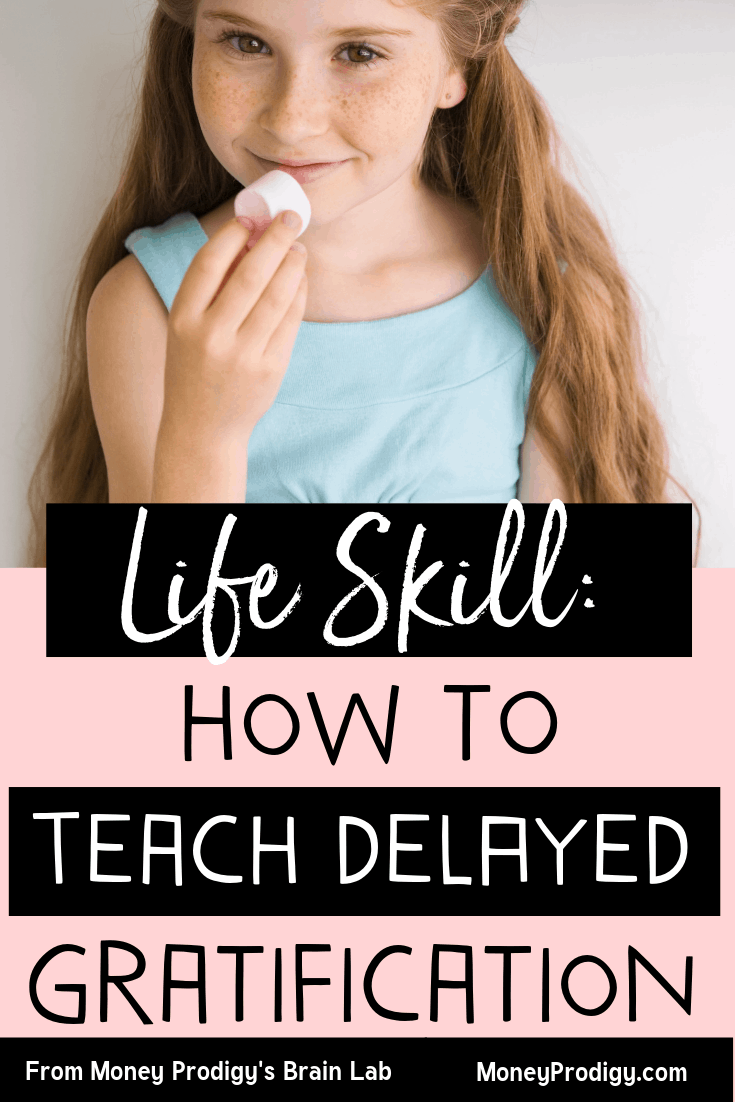 Then you've probably heard about the Marshmallow Delayed Gratification experiments.

Pssst: Marshmallow smarshmallow experiments? Here's a quick rundown for you. In the late 1960s and early 1970s psychologist Walter Mischel ran a series of tests on kids aged 4-6 from the Bing Nursery at Stanford University. Each child was offered either one small reward now (their choice of an Oreo, a marshmallow, or a pretzel stick) or a bigger reward (two marshmallows)  if they held out for approximately 15 minutes. An eternity in kid time! In other words, the child could eat the yum-o food immediately, or, if they didn't give into temptation for around 15 minutes, their reward was doubled.

Note: these results are debated, and sometimes they don't show up when others try to replicate the experiments.

But that doesn't matter for purposes of this money lesson (this is a precursor to goal setting for kids, fyi).

You see the thing is, I think these experiments are very related to a child's ability to actually see their goals through.

Because let's face it: you need to know how to delay gratification if you're going to reach a goal.

You need to not eat that marshmallow − not only today, but for many days to come − in order to reap rewards that are far greater than what you can get immediately.

Worried your kid is going to be one of the ones to scarf down the marshmallow in one minute flat? Don't worry. Keep reading.

What are Delayed Gratification Examples?

Before we really dive into the marshmallow experiment and the lesson I've got for you today, let's give you a few examples of delayed gratification.

Here's delayed gratification in a sentence:

Delayed gratification is making a sacrifice right now or delaying something enjoyable right now, so that you can enjoy something that's even COOLER/BETTER/MORE PLEASURABLE in the future.

In money terms, the very act of not buying something right now means that you can grow that money and use it in a way that allows you to afford an upgrade in the future. This could be because you are literally growing the money by investing it, putting it in a savings account and earning interest, or that you are growing it's capabilities because there's a sale coming up that will stretch it + you have more time to add additional money to the pot.

Instant Versus Delayed gratification Examples (for both kids AND adults):

Now, let's tune back into why on earth marshmallows are so important when it comes to your kid setting money goals.

Why Marshmallows are Super Relevant to Money Goal Setting for Kids (Not to Mention, Goal-Achieving)

In your own life, think about how much better finances get when you delay gratification.

You might be wondering, “yeah, but, my kid is probably going to eat the marshmallow. Does that mean they're cooked for life?”

I've got good news for you (and for every other parent of a kid who is impulsive…because aren't they all to an extent?). Let me show you one way for how to teach delayed gratification.

What is the Marshmallow Effect?

You could conduct the Marshmallow Experiment right now on your child as a one-time event. And it'd probably be something fun + interesting to do.

But it turns out that delayed gratification can be a learned behavior.

Why is that? In a recent interview with The Atlantic, original experimenter Walter Mischel, explains that for both adults and kids, the ability to delay gratification is actually like a muscle that people can choose whether or not to flex.

So if your goal is to get actual behavior modification − hey, if chimpanzees and some capuchin monkeys can learn it, there's hope for any kiddo − then you want to set up something that isn't one-and-done, but instead offers continual learning + reinforcement opportunities.

Something that will grow that delayed gratification muscle (you know the one, right next to the left bicep?) good and strong when laying the foundations for successful goal setting for kids.

And how do you make any muscle stronger?

With a little repetition + sweat.

I've got a plan for you to both strengthen whatever delayed gratification muscle your child already has + grow it in Money Prodigy fashion.

It's something anyone should do before moving onto money goal setting for kids (also, one of my favorite delayed gratification activities for preschoolers! Why not start them early?).

#1: Something that has a reward that can be guzzled right now (i.e. the instant gratification).

That's why I love chocolate coins for this, because not only does it offer an immediate reward (the chocolate), but it also resembles money.

You can snag several different-colored chocolate coins minted to look like a quarter from Party City for just $0.07 each.

Don't forget to let your child know that these are special coins because they are chocolate, and can actually be eaten if/when they would like.

#2: A greater reward the coins can be traded in for in the future.

You could take this in a few different directions:

Psst: Do you want to really relate this to money? You can put the concept of interest into your child's brain, and tell them that their money will earn a form of interest from you guys if they can hold onto it until X date.

You need to develop some sort of system that tells the child:

#4: Trust that the other, bigger, reward is really there.

Trust that the bigger reward will actually be there (and that they aren't delaying their chocolate gratification for nothing) is really important. So much so that in the Marshmallow Experiments they laid out the extra marshmallows on a tray right in front of the kid.

How can you keep this bigger reward top of mind for your child so that they trust it is there, plus maintain momentum? Could you keep the reward on the fridge using a magnet? Write it on the end of this week's chore chart so they keep their eyes on the prize?

A note about the importance of not breaking promises when parenting kids and teaching delayed gratification: From a 2012 University of Rochester study, toddlers were divided up into two groups. In Group 1, the adult kept her word about going to get art supplies, and in Group 2, she came back empty-handed even though she said there would be art supplies coming. They did this again, but with stickers. Then, they gave the Marshmallow test. Don't you know that 2/3 of the kids who were in the group where they could rely on the adult waited 15 minutes for a second marshmallow, but only one kid out of the entire second group was able to wait. Trust and following through is so important! Your kids are listening to you.

Decide on how long your kid needs to delay their gratification before they can cash in on the bigger reward.

This isn't the Marshmallow Experiment, so no need to up the ante for your child after only waiting 15 minutes (unless you think that's a good place for them to start). You can have them put some sweat into this.

Typically, the younger the child, the shorter the duration you want them to endure. So perhaps a few days for a child aged 6-8, and a month for a teenager. You choose, and if what you choose seems too challenging at first, then change how you do it the next time. You're in charge of this!

Once that time is up, either deliver on the goods, or start over if they already ate the chocolate coins.

Since delayed gratification is like a muscle, you might need to try this out a few times before some self-control is built up. And if it doesn't work for your child this year? Revisit it again next year, when their brain's natural impulses have had a chance to mature a little.

I firmly believe that you (yes, YOU) are qualified to teach your child and students about money. You just need some smart tools and resources – that’s where I come in. Keep reading, and you'll walk away with confidence + a clear strategy for how to teach your kid about money in the way you wish you’d gotten growing up.