This post may contain affiliate links - it's how we pay the bills around here.

This post may contain affiliate links - it's how we pay the bills around here.
134shares

Should kids get allowance? We'll look at how to get your allowance system right, and when allowance does more harm than good.

Let’s face it: whether or not to give an allowance to kids is a hotly debated topic among parents. 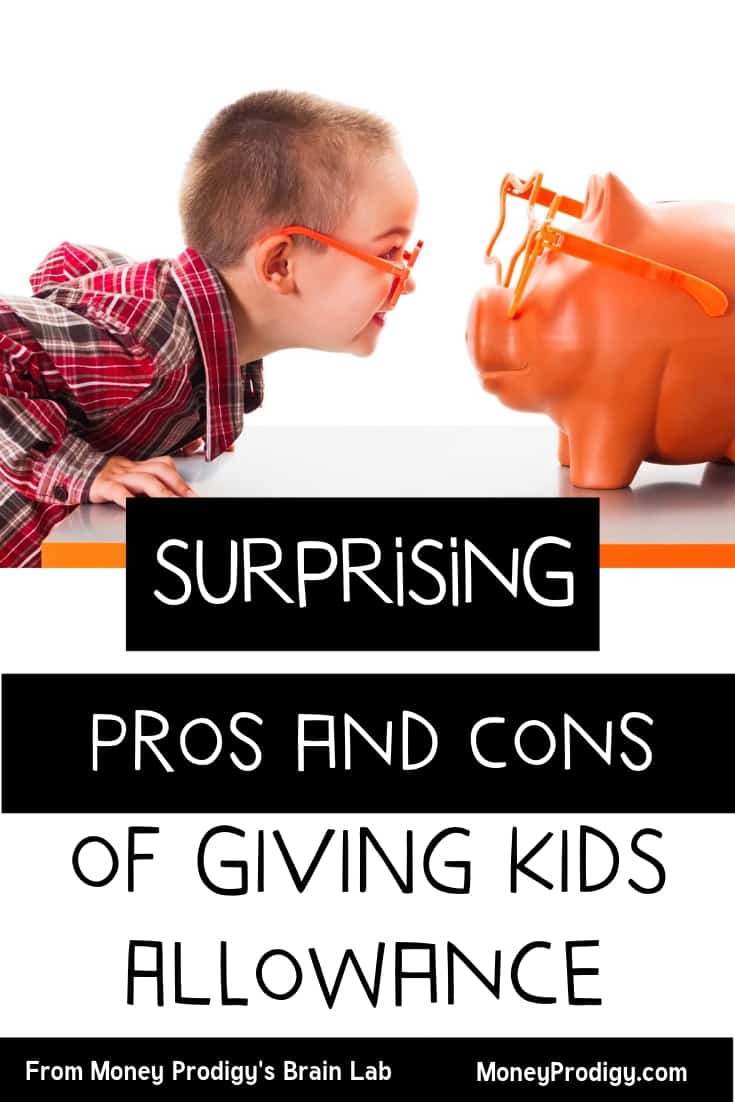 It's an important topic we want to get right for our kids, but at the same time, many adults find money management to be confusing and difficult.

Giving kids an allowance – whether that’s money given to your child outright, earned through chores, etc. – is like giving your child a set of money training wheels to prep them for what to do with the consistent income they’ll have one day

IF you do it right.

But if done incorrectly? Well, it could instill some not-so-desirable money behaviors in your child that could hurt their future bank accounts.

You probably have lots of questions already, all of which we’re going to address here in this guide.

Let's start with whether or not your kids should get an allowance.

Should Kids Get Allowance – Yes, if You Do it Right

If you set out to do an allowance the right way, then there are a treasure trove of money lessons your child can learn through it.

Let me outline for you several pieces your allowance system has to have in order for it to be successful.

Pssst: don’t follow these? Then you’re probably not ready to start an allowance for your child.

There are various ways your allowance system (allowance/chores/commissions – whatever you call it) could be inconsistent.

:: You forget to pay your child an allowance sometimes.

:: You pay them at different intervals (so sometimes once a week, and other times, once every two weeks).

:: You pay for chores, but the expectations you have for whether the chores were completed well enough for payment change depending on, well, whatever (the weather, your mood, your patience level that day – boy can my little guy test mine!).

:: Sometimes bailing your kid out when they need a “loan” from their next allowance period.

The reason why it’s super important to be consistent with whatever type of allowance you are giving to your child – whether it be through an allowance, through chore commissions, through employment, etc. – is because consistency is where the money lessons are.

Having a Consistent money source enables your child to:

Sure, there are a heck of a lot less when you’re a kid (ahhh those were the days – when $5 a week meant I could fill my candy quota).

So, if you never hand over money responsibilities with the actual money…then you’re missing out on some key lessons in life.

And don’t forget that once you give them a money responsibility to take care of, you also will probably have to fork over more money. I mean you can’t expect them to take over the spending of their weekend activities on $3/week (unless you want them to lose motivation, that is!).

Allowance Tip #3: Make it Yours

There is no one “right” allowance system or model.

I’m going to just put this out there, right off the bat. Because let’s be real – despite what the gurus think is the ONE answer for every single child, and despite how many articles on allowance jars you see out there, you and I both know that children are different.

What may work for one child, or a group of children, will not work for others. And after researching the allowance landscape for a few months, I can honestly say there are convincing arguments for each side of the allowance vs. chore commissions divide.

So, we all need to stop swinging mud at one another and start looking at the tweaks that can be made to any Kid Money System (what I call the system for how money gets into your child’s hand – it’s a bit more than that, but we’ll leave it there for now) to make it tailor-made for your family.

There are many mistakes parents unknowingly make that can derail allowances, making it the wrong choice.

Let’s talk about the major mistakes to avoid because when they’re made, your allowance may do more harm than good.

When you're inconsistent with various parts of your allowance, then your child misses out on lots of valuable lessons. They can lose momentum on their money goals, they may never set money goals to begin with since they don't know when the money is coming, and they fail to suffer any consequences from their spending decisions (because, hey, they can always blame you or whoever gives out the money because you don't always do it at the same time).

Allowance Mistake #2: Giving Too Much Money

If you give your child enough money to buy all their needs AND wants each allowance payday cycle, then they’re going to miss out on a lot of the important lessons of money management.

Do you fondly think back on the allowance you used to get/earn in your own childhood? You might also get to thinking, “my kid should get the same amount I did.”

But if you want your kid to get a similar allowance to your childhood amount, then you need to adjust for inflation.

In other words, the $5/week that I used to get when I was 9 years old? It couldn’t buy today what it used to buy back then, because products and services naturally increase their prices over time.

There’s a simple tool here you can use to plug in your old allowance figures and see what it would be in today’s dollars.

Pssst: try not to do TOO much emotional adjustment with the number that calculator spits out for you, as the numbers don’t lie.

Allowance Mistake #4: Thinking that an Allowance is a Money Lesson

Let me just get this off my chest: giving children an allowance is NOT a money lesson.

Sounds crazy, right? I mean of course it seems that if your kid gets some money into their hands and gets to make a few decisions with it, that they’re bound to learn money lessons.

But according to the research done by one man, who looked at over 50 allowance studies over the years, the money lessons don’t occur JUST from handing your child over money.

Nope. They occur in the follow-up (i.e., in the money conversations + expectations that you attach with the money you’re giving your child).

Professor Lewis Mandell, who headed up the study of looking at the last 50 years’ worth of allowance research, concluded that:

“in today’s busy world parents too often simply pay their kids an allowance with no discussion of what it is for or how to manage the funds.”

You’ve got to include money conversations and recap sessions where you go over what your child learned from their latest money blunders in order to pass on those money lessons to your child.

Why Shouldn’t Kids Get a Larger Allowance?

Let me ask you this – if you looked in your checking account right this moment, do you have all the money that you need to cover your bills + all of your desires?

Actually, I just asked you a question I already have an answer for.

That’s because no one has enough money sitting in their checking account or wallet to cover EVERYTHING they could possibly want and need.

And you know what? Your child won’t ever have this as well.

Money is a limited resource, and they’ll need to learn how to prioritize the things they want to spend it on, just like you and I have to prioritize what we spend our paychecks on.

Because of this, you shouldn’t give kids a large allowance.

If you give your child a large allowance – and by “large”, I mean one that covers all their current wants and needs – then they won’t be able to learn how to do things like:

And those are pretty darn important things to learn about money, right?

I hope you can see that figuring out the answer to should kids get an allowance really means figuring out a solid allowance plan to move forward with. If you decide to go that route, then yes, by all means, give you child an allowance! If you're not ready to fully commit to the process, then you might want to hold off on starting an allowance at all.

Teaching Kids to Save Money? 15 Saving Tips for Kids