7 Conversations to Have Once Your Teen Starts Earning a Paycheck

This post may contain affiliate links. You can find the full disclosure here.
101shares

With a teen’s first job comes all kinds of teen money questions, like how much should a teenager save from their paycheck? Does a teen pay taxes? 11 money conversations you need to have.

Congrats, Mama Bear. Your teenager – who used to be your three-nager – has taken a huge step out into the real big world by getting their official “teen first job”.

They may have even gotten their first paycheck. 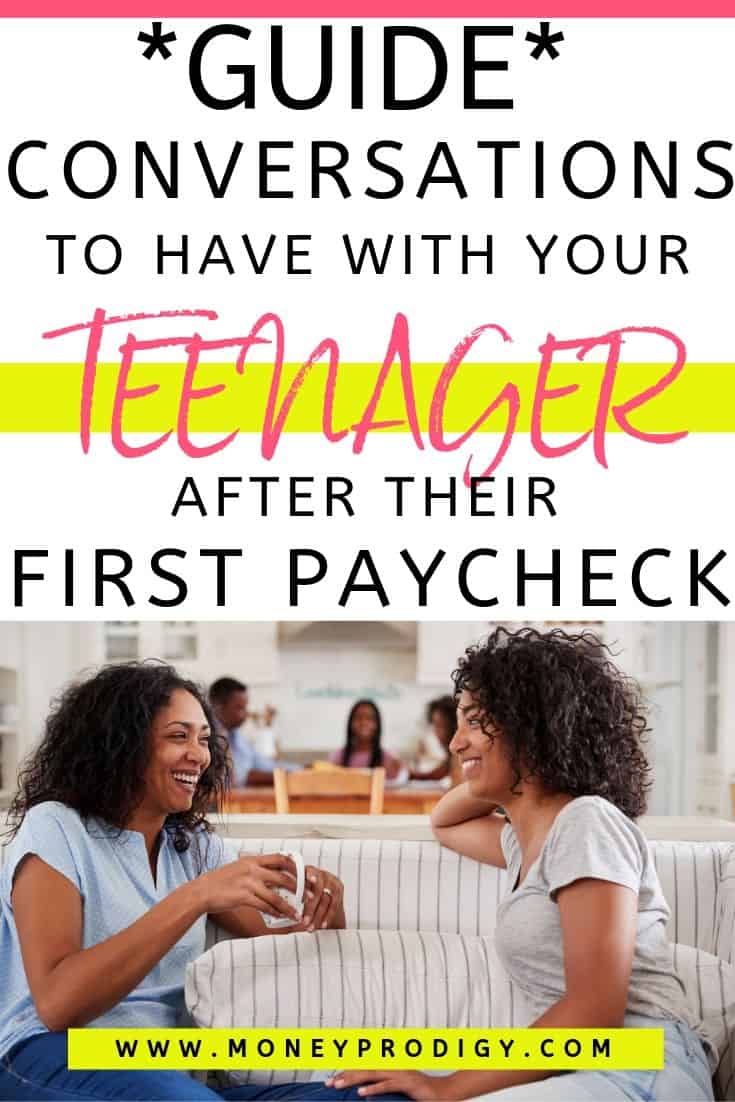 This is a biiiiigggg milestone!

Maybe they drive themselves. Maybe they’re hitting you up their transportation.

Maybe they work on weekends, or only just a few days a month.

Whatever it looks like, it’s ending with a beautiful (albeit, small) paycheck in their name.

Today I want to help guide you through the money conversations to have with your teenager once they start earning their first paycheck.

Pssst: you’ll definitely want to check out my guide on your teen’s first job – help with finding one, and prepping for it.

Remember alllll the Way Back to YOUR First Job

Do you remember the awesomeness of getting that first paycheck as a person still living under your parents’ roof (pssst: that’s right, I’m not talking about the first paycheck from a job-job where you realized you’d have hardly anything left at the end of the month)?

With the help of my Dad, I had gotten a job at a local horse farm to muck out horse stalls. There were several raises along the way, but it tapped out at $98/week.

This was a small fortune to a 15-year old!

So, when was your first paycheck?

This will help you in figuring out how you want to address the following topics with your own teenager.

Other topics you might want to check out? Here are 25 online jobs for teenagers, and here's what to do if your teen needs a job but doesn't have a driver's license.

Since income is going to be a bit more consistent going forward, it’s time to get clear on your teen’s banking system (and to help them understand how it all works).

As in, how does money come into it? How does money leave it? And how can they set aside money in a safe location?

Bonus Tip: Make them aware of the consequences when over-withdrawing on their new banking system, such as an overdraft fee (they’ll choose whether to allow overdrafts or not when the account is first opened. If they don’t allow it? Then there are no fees…but the transaction gets denied).

Conversation #2: You Will Be Paying Taxes

There are two different sub-topics to cover having to do with “taxes.”

Your teen will likely need to both a) file taxes by the April deadline, and b) pay taxes. And yes, filing taxes for the first time can feel really intimidating as a teenager!

Here are some conversation pointers around this topic:

Here’s a great guide by ConsumerFinance.gov on teens and taxes.

Conversation #3: How Much Should a Teenager Save from a Paycheck?

Not only should you and your teenager figure out  how much they should save from their paycheck, but you should help them set their first savings goal.

I just love the subject of setting a savings goal, creating a savings plan, and seeing it through. In fact, I created an entire program called the Everest Money Simulation that goes through all of this during one wild ride.

Now’s the time – while your child has actual money coming through the door, on a semi-consistent basis, that they’ve made sacrifices to get – to teach them the power of setting a savings goal, backed up by a solid plan for how to get there.

To set a savings goal, you’ll want to:

To figure out how much a teen should save from their paycheck, you'll need to figure out what their new money responsibilities are going to be now that they're getting paid (see below), what the allowance shifts look like in your household, and what you expect them to save up for.

I love this one, because it gets you to think beyond the usual conversations (such as that you have to pay taxes and you should save at least 10%) and instead think about using their first paycheck to start defining shifting money responsibilities.

Suze Orman’s 17-year-old niece had something very interesting to say:

“The students who get both a paycheck and money from their parents say they work because they want to feel independent, get work experience and like making their own money. But they also don’t feel pressure to hang on to their money. They know their parent is a safety net; if they can’t cover a purchase from their paycheck, Mom or Dad will likely help. Students who don’t get any money from their parents have a different relationship with money. They look at every potential purchase and calculate how many hours of work it will take to have the money to buy the item.”

You may not be ready to completely shift buying responsibilities to your teen – especially since they’re, well, just a teenager.

How is allowance or chore commissions going to shift in your household now that your teen is making their own money?

Do you continue giving them the same amount that they were getting before, do you scale back, does the amount they earn need to now go into a college savings fund? Lots of questions to address here.

Keep in mind that part of the money you give them may be for them to take care of some of their necessities, such as school clothes, school lunches, or things of that nature.

Conversation #6: You have the power to Become a Millionaire BEFORE You’re My Age

Your teen’s first paycheck is the perfect opportunity to show them that their greatest asset right now is TIME.

Show them what saving 10% or 20% or 50% of their current paycheck could grow to in 10, 20, and 30 years. Sit down with them and their first paycheck, and plug in the numbers using this calculator.

Conversation #7: Give them Your Paycheck Expectations

What financial responsibilities do they now have to be paid from their paychecks?

In my interview article about how the Amish deal with their kid’s paychecks, Leroy used a 10/10/80 rule, with 10% for spending, 10% for investing, and 80% to his household that increased the investment amount + spending amount and then decreased the household amount each year of employment.

Which conversation are you most excited about having…and which makes your stomach turn? Let me know in the comments below and I'll see if I can help. 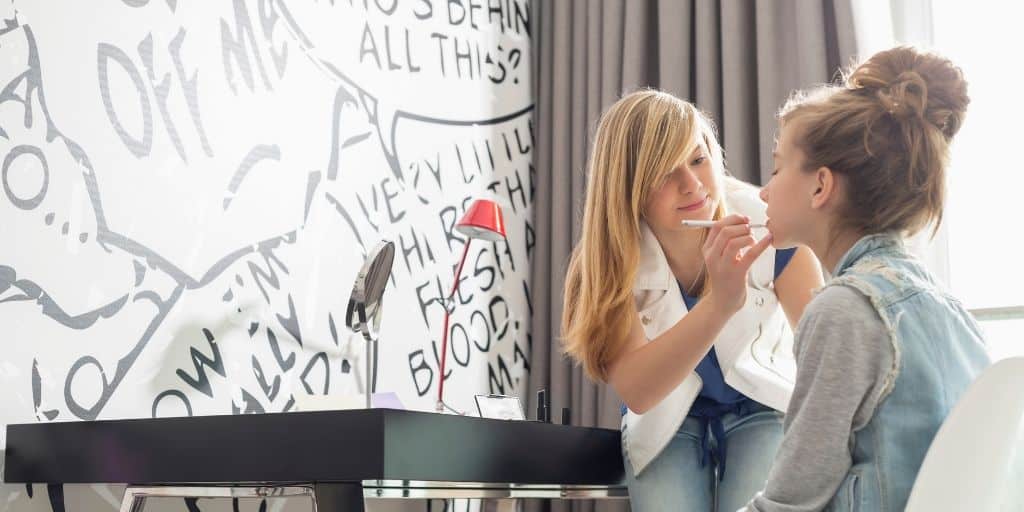 Teen First Job Guide: How to Prepare for Your First Job as a Teenager
← Read Last Post 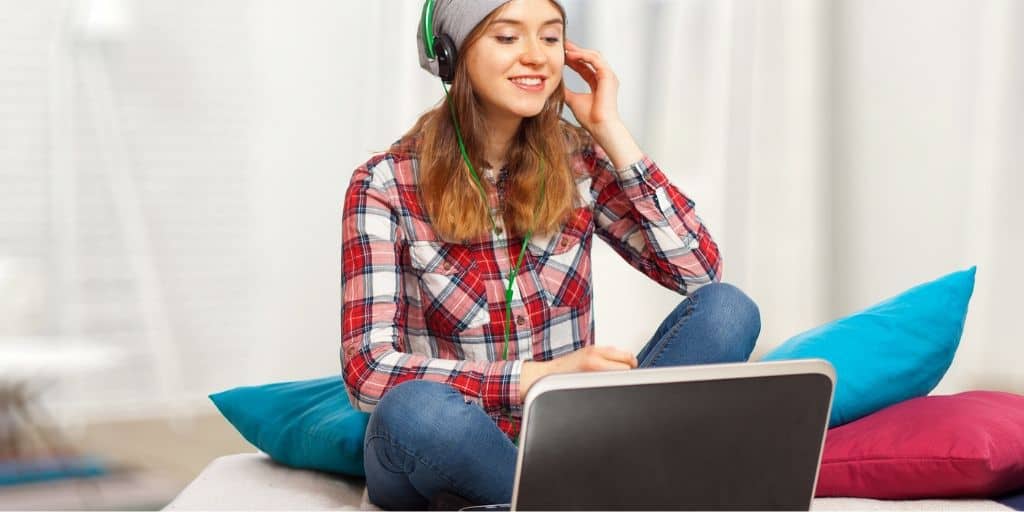 25+ Online Jobs for Teenagers that Pay (Jobs for Ages 13 and Up)
Read Next Post →
Comments are closed.